I used to be a big fan of broad matching keywords on PPC. Then I became a big fan of using Modified Broad Match. Lately though, I prefer to use only Phrase and Exact match, and have been getting some excellent results. Here’s an examination of how these different keyword match types have worked for me in my experience.

Broad matching keywords makes Google the most amount of money because the less relevant a keyword query is to the ad creative and landing page, the lower the quality score and the higher the CPC will be. Also, your Click-Through-Rates won’t be as good because your ad creative won’t always match what the user is looking for. Â The benefits to using broad match though are twofold:

The caveat though is that you’ll need to build out a gigantic list of negative keywords – and non-relevant keywords will always manage to slip through the cracks and waste your marketing dollars. I consider this the “lazy approach” to setting up a campaign, with one exception: if I have a new campaign that’s not generating much activity, I may add a few keywords on Broad Match.

By adding the + sign in front of your keywords, you are telling Google to only serve your ad if all the keywords in the query match up. So for example, +new +york +city will match NEW YORK CITY and not “new york”, because it must include all 3 keywords that have the + sign. There is a little bit more control here than with Broad Match, but at the end of the day, you still have the same issue of having to build out a long negatives list, you still don’t know what Google will let through, and your CPCs will still be high due to questionable relevancy. Here’s an article that explains Modified Broad Match well.

Moving onto Phrase Match, which is surrounding your keyword with quotes so the exact keyword phrase must much, but can also include a word before and/or a word after. So “gucci bag” will match “buy a gucci bag” and “gucci bag for sale” and “buy a discount gucci bag online”. You still need to build out a decent negative keyword list, but Phrase Match weeds out the junk much much better than Broad Match, and increases relevancy tremendously. With Phrase, you’ll see better quality scores and lower CPCs than with Broad and Modified Broad Match. Also, if you still want to capture keyword variations that you may not otherwise have thought of, then Phrase can help you do so at a much lower cost than Broad. I am a fan of Phrase Match for this very reason. Any time I see a conversion on a Phrase Match keyword, I will make sure to bid on it in the Exact Match form, to lower the CPC.

My best quality scores, highest CTRs and lowest CPCs come from Exact Match keywords. By adding [brackets] around your keyword phrase, you are telling Google to serve your ad only if the exact keyword phrase is queried. There is much more relevancy here so your click through rates will be higher. Since Google’s ultimate goal is to connect users to the most relevant content they are searching for, Google will reward you, the advertiser, with better positioning and lower CPCs if the relevancy is high.

Another benefit in my opinion of using Exact Match is that you don’t have to build out extensive keyword negative lists. HOWEVER, Google can still put keyword misspellings through, so if you don’t want this, turn off the Keyword Option in Settings to “Include plurals, misspellings, and other close variants”.

NOW, all this is great, but how can we see this in practice? Below is a screenshot of a campaign I am managing for a Home DecorÂ company, which shows, from highest to lowest, the CTRs achieved this month.

Nice, right? Now, the very last campaign is my brand campaign, which coincidentally is the only campaign that is using Broad Match in the keyword mix, and happens to have the lowest Click Through Rate of all the campaigns. The reason I bid broadly on the brand name is to ensure that every variation is accounted for since the name is pretty generic. As a result, IÂ receivedÂ less clicks to the ads as the other campaigns, yielding a lower CTR. Â Typically brand campaigns will tend to perform the best, have the highest CTRs, highest conversion rates, etc., because the relevancy of a brand query to your brand’s website is perfect.

So my navigation campaign has low CTR, big deal! Â We still have a low avg. CPC, and converting nicely. But, my average CPCs should be even lower on my own brand name, and my Quality Scores, which should be all 10s on my name are not. I have some 5, 6, and 7’s in the mix, a result of the CTR being low (among other factors).

So now you can see how everything is tied together.

At the end of the day, while it’s nice to have great CTRs and quality scores, what we truly want to achieve is conversions at the lowest possible cost. If your campaigns are running beautifully and you are not converting, you can deduce that the problem is with the website and/or landing page, and you can take appropriate action there.

But, I have gotten off track. We are talking about keyword match types. Â As I am continuously monitoring which keyword queries trigger my ad creatives, in my brand campaign (which contained the brand name on Broad Match), I noticed an amusing result: 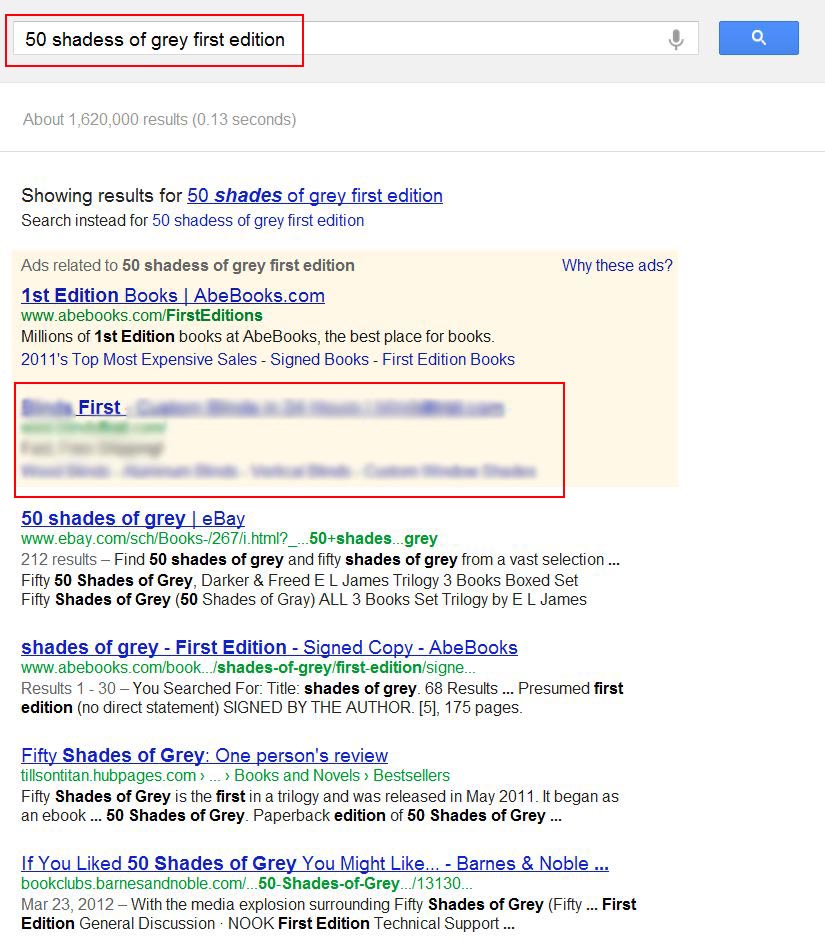 Google matched the keyword “First”, which appears in the brand’s name, with a misspelling of the query for “50 Shadess of Grey First Edition”. HAHA. I can assure you that the brand has nothing to do with this book. There were actually 2 clicks through to my ad on this query, wasting about $10. Â Sometimes King Google has it’s missteps too ð

At the end of the day you may disagree with me and say that broad match is awesome, that you’ve converted on keywords that you may not otherwise ever have thought of to bid on. True, but how much waste did you have in order to get those conversions? The right way in my opinion is to use Phrase & Exact Match to reach the rightÂ audience, and to continuously be doing keyword researchÂ and mining organic keyword data from your analytics to capture new keyword queries.